On December 15, 2021 at 18.00 (GMT +3) Richard Newhauser, Professor of English and Medieval Studies at Arizona State University, will give a talk "Sensology and Enargeia" at the seminar "Symbolic Middle Ages" organised by the Centre for Medieval Studies (HSE, Moscow). 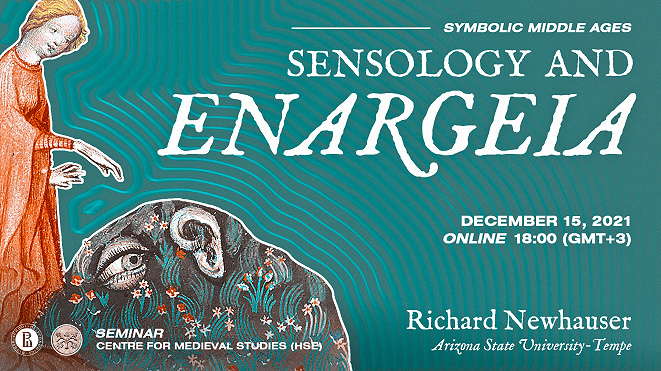 Using sensology (or sensory studies) to examine the feelings produced by the reception of intensely vivid descriptions that early rhetoricians termed the literary technique of enargeia provides a focal point that at once claims specificity in particular collective responses to the reception of literature within sensory communities and also provides a channel from sensation to perception that no longer privileges the visual. Nevertheless, sight, as well as the other senses, should be understood to have more agency in the Middle Ages than we accord the senses today, as this was well understood by a writer on optical matters like Peter of Limoges. Furthermore, by drawing on sensology and on concepts it has developed, we can usefully supplement some of the work of affect theory and emotionology by grounding emotion both in what Bruno Latour termed “the social” and in a philosophy of embodied experience (phenomenology). The rhetorical appeal to enargeia begins with Aristotle. Eventually, the term came to be applied to the capacity of literature to create the sensation of vividness in the audience. Enargeia requires a marshalling of the senses to achieve that goal, Quintilian argued.

The interconnection between affects, emotions, and the senses can be pressingly felt in the late-fourteenth-century Piers the Plowman’s Crede, a Middle English text that articulates the political charge of creating and appealing to sensory formations in literature.What makes the enargeia of the poem so effective is that it upends the cultural understanding of sight and touch within the sensory community of the peasantry in late-fourteenth-century England. The physical misery of the poem’s peasants becomes reinterpreted through the transgressive spiritual and political authority with which a plowman comes to speak with the narrator. Sight and touch, as culturally constructed to express vernacular masculinity within the peasant sensory community, is an integral part of depicting the intensity of deep sorrow, physical weariness, and also spiritual triumph. To speak with Jacques Rancière, the vivid depiction of peasant misery also accomplishes political work by making “audible what used to be inaudible.”


The event will be held online via Zoom. To receive the link please register here.