St. Ladislas’ Cult, Symbolic Actions, and Heraldic Devices as Tools of Anti-royal Propaganda during the 1401-1403 Political Crisis in the Kingdom of Hungary

On April 27, 2021 at 18.00 (GMT +3) Dragoş Gh. Năstăsoiu, Research Fellow at the Centre for Medieval Studies, will give a talk about "St. Ladislas’ Cult, Symbolic Actions, and Heraldic Devices as Tools of Anti-royal Propaganda during the 1401-1403 Political Crisis in the Kingdom of Hungary".

The event will be held online. To receive the link please register here. 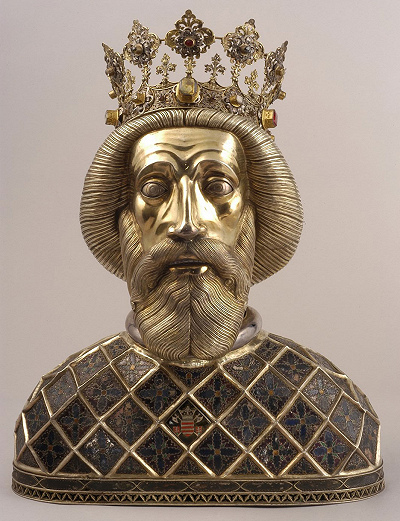 – Abstract –
On Christmas Eve 1402, a number of Hungarian noblemen gathered in the Cathedral of Nagyvárad, where the tomb of St. Ladislas was located, and swore an oath on the relics of the holy king, who had reigned between 1077 and 1095 and had been canonized in 1192. Through their gesture and in opposition to the ruling king, Sigismund of Luxemburg (r. 1387-1437), these Hungarian noblemen proclaimed their allegiance to King Ladislas of Naples (r. 1386-1414), a claimant to the Hungarian throne on the basis of his Angevin lineage. By swearing oath on St. Ladislas’ relics, the conspirators united their minds and forces around the ideal figure of the holy king and knight, who became thus the symbol of a political cause and the embodiment of the kingdom, which the ruling king was no longer suited to represent. This symbolic gesture took place in the midst of a three-year political crisis (1401-1403) that seized the Kingdom of Hungary as a consequence of the barons’ dissatisfaction with King Sigismund’s measures, which jeopardized their considerable wealth and political influence.
By relying on both written accounts and visual sources, this paper examines the utilizing by the anti-Sigismund party of important symbols that were associated with the Kingdom of Hungary. Political and spiritual alike, these included: the cults, relics, and visual representations of St. Ladislas and the other Holy Kingsof Hungary (i.e., Sts Stephen and Emeric); the Hungarian Holy Crown; or the kingdom’s coat of arms (i.e., the Árpádian double cross). The two leaders of the anti-royal movement, that is, Archbishop of Esztergom John Kanizsai and Palatine of Hungary Detre (Detricus) Bebek, commissioned repeatedly works of art (e.g., seals, stained-glass windows, and wall paintings), which featured prominently the images of the three Holy Kings of Hungary or displayed the realm’s heraldry. Their reliance on the cults and images of the patron saints of the country blended harmoniously the commissioners’ personal piety with their political ambition. The propagandistic usage of these spiritual and political symbols was reinforced by their insertion into elaborated rituals and symbolic actions, such as coronations or oath-swearing on holy relics. These activated the link between secular and religious spheres, their performers hoping to attract the divine approval in this way.
Subsequently, the present paper seeks to illustrate, on the one hand, how the ideal figure of St. Ladislas became the catalyzing force behind a political cause and a powerful symbol of the country, and, on the other hand, how the appropriation by Hungarian noblemen of the kingdom’s heraldry became a means of self-identification with the realm and its envisaged fate.